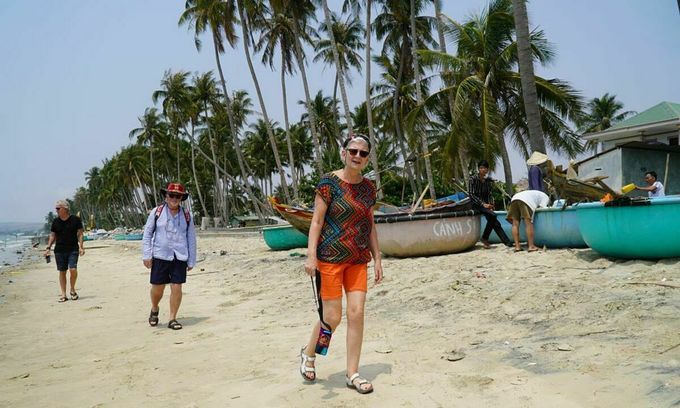 The government is worried about the increasing discrimination against foreigners by tourism establishments because of coronavirus fears and asked for a crackdown on it.

In a directive on Wednesday it ordered all local administrations and tourism authorities to severely punish perpetrators of such acts to safeguard the country’s tourism image.

On Tuesday two Belgian tourists arrived in Hanoi only to find their hotel booking had been canceled without notice. They decided to leave for the northern highlands town of Mai Chau in Hoa Binh Province for four days and do not know where to go after that.

Duong Thi Huyen, owner of the Mai Chau Hideaway resort, said her staff told her that the visitors’ “mood was very bad.”

The resort took in the Belgians after they made medical declarations so that they did not feel disappointed.

Huyen said it was a conscious decision and the resort was prepared for the consequences “including shutdown, quarantine and loss of reputation if they are found infected with the virus.”

“But honestly we cannot refuse guests coming from afar.

“Most of those working in the hospitality industry welcome all tourists. My resort has 40 staff and if it is unfortunately isolated or closed due to the epidemic, there will be a lot of affected staff.”

Elsewhere, a European tourist was refused a room by six hotels in the northern province of Ninh Binh, where some hotels have completely stopped accepting bookings from foreigners.

A group of 18 French tourists was recently denied entry by authorities in the Central Highlands province of Kon Tum. They were forced to go to Dak Lak Province instead, where a hotel only accepted them on the tour company’s persuasion.

They returned to HCMC to return home, but Vietnam Airlines, the only carrier flying direct to Europe, suspended all flights to France from Wednesday.

Dr Luong Hoai Nam, member of the Tourism Advisory Council, said: “I do not condemn the hotels that refuse western tourists as discrimination. They worry, they have the right to worry. The most important thing is how to deal with the situation, ensure there is no discrimination against western tourists and serve them in a safe, organized manner.”

The number of foreign visitors to HCMC last month fell 52 percent from January to 346,560.

Vice Chairman of the city People’s Committee, Tran Vinh Tuyen, on Tuesday sent a letter to foreign tourists calling for their cooperation in combating the spread of the epidemic.

Officials around the country have been calling out against discrimination to protect the country’s reputation. Authorities in Hue, Hoi An and Da Nang have urged hotels and restaurants to be friendly to foreign tourists.

The novel coronavirus has slashed an estimated $7 billion off Vietnam’s tourism revenues in January-February with the number of hotel guests decreasing by 60-70 percent year-on-year, Government Office chief Mai Tien Dung said at a meeting last week.

Of the nation’s 76 cases of Covid-19 infection, 60 have been detected since March 6. Sixteen had previously recovered and been discharged. Of the 60, 22 are foreigners, 21 of them are European and one American.

The World Health Organization recently called Europe as an epicenter of the Covid-19 pandemic. The pandemic has spread to 176 countries and territories, claiming almost 9,000 lives.

During the Covid-19 pandemic, do as the Vietnamese do